The President, elected by Parliament every five years, is Head of State.

The Prime Minister is Head of Government.

The Ministerial Council, consisting of the Prime Minister, Ministers, Deputy Ministers and Ministers without portfolio, is the collective decision-making body that constitutes the Government of Greece.

Judicial power is vested in the courts of law, whose decisions are executed in the name of the people.

Although the President of the Republic has limited political power, as most power lies with the government, his duties include formally appointing the Prime Minister, on whose recommendation he also appoints or dismisses other members of government, he represents the State in its relations to other States, proclaims referendums etc.

General elections are normally held every four years unless the Parliament is dissolved earlier. The electorate consists of all Greek citizens who are 18 years of age. Each new Government, after a general election or after the previous government’s resignation, has to appear before Parliament and request a vote of confidence.

The State is structured by the Constitution. The Constitution of Greece is the fundamental Charter of the State. It has been voted by the Fifth Revisional Assembly and enforced in 1975. It was amended in 1986, in 2001 and in 2008 by the Greek Parliament. It includes the main rules concerning the structure of the State, the exercise of its powers by the authorities as well as a list of human rights.

The restoration of democracy in July 1974 signalled a turning point in Modern Greek political history. When the military regime that had ruled the country since 1967 collapsed, a transitional period began with the formation of a “national unity” government under Konstantinos Karamanlis, who had played a prominent role as Prime Minister during the late fifties and early sixties. Three major decisions were taken by the “national unity” government: First, to organize free parliamentary elections for the election of a constitutional assembly; Second, to organize a referendum on the question of the monarchy, and Third, to legalize the Communist Party (KKE), which had previously been considered illegal since its formation.

The Hellenic Parliament is the supreme democratic institution that represents the citizens through an elected body of Members of Parliament (MPs), whose core activity is legislative work and the exercise of control over Government. It consists of 300 Deputies, elected through direct, universal, secret and simultaneous ballot, for a term of four years, by citizens who are eligible to vote. Voting is compulsory. The Parliament is headed by the Speaker.

The Constitutionally established Judicial system of Greece, consists of Civil and Criminal Courts.

The Council of State (Symvoulio tis Epikrateias) is the Supreme Administrative Court of Greece; Areios Pagos is the Supreme Civil and Criminal Court and the Court of Audit (Elegktiko Synedrio) has jurisdiction on the audit of the expenditures of the State, Local Government agencies and other legal entities.

Visit the website of the Council of State (www.adjustice.gr)

Presently, there are seven decentralized administrative units throughout the country:

The “Kallikratis” programme, which has been in full force since Jan 2011, focused on restructuring the decentralized administration, reducing the number of municipalities (from 1.034 to 325), as well as enhancing them by conferring new functions to local level. The “Kallikratis” reforms also introduced concrete measures to address the financial crisis by enhancing transparency, supporting innovation and the use of new technologies, ensuring the financial autonomy of local authorities and strengthening their role in the formulation and implementation of policies at local level.

The public sector in Greece includes Ministries, Local Government Agencies, Public Legal Entities and Independent Administrative Authorities. There are ongoing efforts in recent years to further promote transparency and accountability in the Greek political-administrative system. This important area of reform involves the introduction of new institutions. Special bodies of inspectors (Administrative Inspectors and the Financial Crime Confrontation Body), have been established in order to increase public control on bureaucracy, to combat corruption and improve transparency, as well as the effectiveness of specific public policies.

Pertaining to the selection and training of civil servants, a High Council for the Selection of Personnel has been established since 1994 (ASEP). It is an independent authority overseeing the selection process, ensuring merit, impartiality and transparency. In 1983 the National Centre of Public Administration was founded with the aim of training civil servants. High level civil service officials have been trained in its National School for Public Administration before entering the public service. The Institute for In-Service Training is an additional unit of the Centre, ensuring continuous professional training.

It is celebrated on March 25th, a day marking the commencement of the Greek people’s successful struggle against the Ottoman Empire (1821-1830), which culminated in the establishment of an independent state. Along with its national connotation, it is traditionally commemorated also as the religious day of Annunciation. 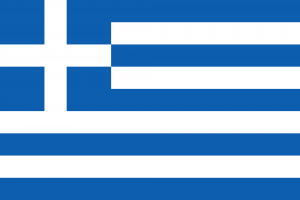 The National Flag of Greece consists of four white and five blue alternating horizontal stripes, with a white cross on the upper left corner. Blue and white are the national colours of Greece, as blue symbolizes the sky and seas and white denotes the purity of the Greek independence struggle. The cross represents the Christian religion. The nine blue-and-white horizontal stripes of the flag stand for the nine syllables of the Greek motto “Eleftheria i Thanatos” (Greek for Freedom or Death).

The Hymn to Liberty (or Hymn to Freedom) is a poem written by Dionysios Solomos (1823) and consists of 158 stanzas. It was set to music by Nikolaos Mantzaros, (1865) and it is the longest national anthem in the world by length of text. This anthem is being performed at every closing ceremony of the Olympic Games, to pay tribute to Greece as the birthplace of the ancient Olympics. 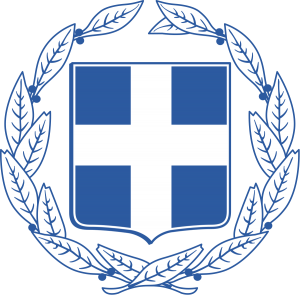 The national emblem of Greece, also known as the coat of arms of Greece, consists of a blue crest with a white cross totally surrounded by two laurel branches. The first Greek national emblem was provided for by the Constitution of Epidaurus of 1 January 1822.

The colours of the national emblem of the Hellenic Republic are blue and white. An additional design with golden laurel leaves appears on the caps of the military officers of the Hellenic Armed Forces as well as on the flag of the President of the Republic.